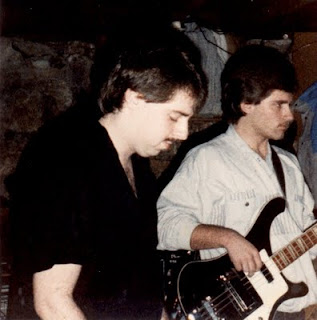 During the Fall of 1987, Scott and I began to search for musicians to form a new band. Our previous band, The Secret Society (rev1), had disbanded after Dirk Frey began to pursue Experimental Jazz music which didn't quite fit with what we wanted to do and Larry Lee Fiber had packed up Melqwar (sp?), the Fiber family station wagon, with all his belongings and headed to Los Angeles, CA to pursue a career in the music business. Larry's move to LA also deserves a special note because, with his move, there was no longer a direct Fiber family presence in Shippensburg. Though their shadows were long from UAS (Underhill Albany Station) and LA, things were never quite the same.

Not to be deterred in our pursuit to form a new band, Scott and I visited a band practice session at the home of Griff "Take a Whiff" Townsend in the Fall of 1987 where we saw Tim "LTJTHC" Harrell on drums and Matt "Scrap Pap" Skirpan on guitar. We liked what we heard from Tim and "Pap" and shortly after that practice we asked them to join the band that we were forming. They said yes and we then collectively began our pursuit for a lead singer.

While attending SU (Shippensburg University), Scott met a guy named Brad Shaeffer whom he had some classes with. Brad told Scott that he was a singer so we arranged to go over to his apartment and audition him. We went over and Brad sang Robin Trower's Bridge of Sighs. Here's where, in hindsight, we should have realized it wasn't going to work out. We really didn't have any similar musical tastes but we needed a singer and he had a microphone (and a "very" small Gorilla amp) so we recruited him and our band was complete.

Now, since we had a band, we needed to find a place to practice and to line up our first gig. Here's where our friend Kurt Smith came into the picture. Kurt was attending SU and living at 9 Queen St in Shippensburg with some of his future Pi Lamba Phi brothers. They were planning a New Year's Eve party for 12/31/87 and asked us if we would play at the party.

At this point, we still hadn't rehearsed together as a band and there was only a week left before the party. Since it was Christmas break for those of us in college and high school, we were able to practice every day but, needless to say, we had a lot of ground to cover. We needed to pick some songs to play and learn how to play them. We ended up with a 7 song set list which included Pung (an original song), Wild Flower (The Cult), Monster Man (The Suburbs), Need You Tonight (INXS), Progressions (an original song), Misty Mountain Hop (Led Zeppelin), and Primitive Love Rights (Mondo Rock).

In addition to picking songs to play and learning how to play them, we also had to pick a name for the band. We had been rehearsing in the basement of 9 Queen St which was also to be the site for our first gig. The basement was affectionately referred to as "The Dungeon" and, as you can see in the picture above, the basement was pretty nasty and was equally "smelly". As an homage to our rehearsal space, we decided on "Dungeon Aire" as the name for our band.

We managed to get through the show and it was well received by the partygoers. They didn't seem to notice that Matt Skirpan's guitar was severely out of tune for most of the set. This was the only gig that we did as "Dungeon Aire" and shortly after this show, we added Kevin "Bart the Fart" Wilson on guitar to the band and changed our name to "This Mistress". More on that in future posts.

There was a jam box recording made of this entire show and, without further ado, here is our version of Monster Man (The Suburbs)...