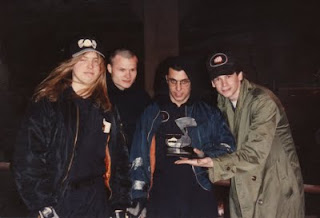 In 1992, the boys from Punch Drunk took home the award for Best Techno/Industrial Artist at the Big Shout Awards. Here they are showing off the hardware!
Posted by Ttam Troll at 2:55 PM No comments:

This TV spot was for a 1993 Punch Drunk gig on Penn State Main Campus in State College, PA. It has the distinction of being the first TV spot that we edited at FFS. Can you tell?
The band had been recording tracks at our studio for their Hardtech Robocore release when the Penn State gig came up. They were asked to provide a :30 spot which would run on local TV to promote the gig and they needed to get it done quickly. They asked us to help them so that's how we got involved.
At that time, we had a "very" primitive 1/2" VHS video editing system (this is before affordable non-linear editing) which included an Azden VE-100 Editor and a Panasonic WJ-AVE3 FX Generator. We sat in the studio with the band and reviewed all of their raw video footage. They chose what they wanted to use and then we did a cuts only edit of the footage. After we had the cuts only edit, we did a pass where MC2P4 added video effects and then I recorded the Steve O voice-over takes. It took him about 3 takes to get something we all liked and that was it. We duped it onto a VHS cassette and they sent it off.
I can't end this post without saying the following...
"I'm Fudge Wink and this is Punch Drunk!"
P.S. That's an inside joke from the session.
Posted by Ttam Troll at 11:33 PM No comments: 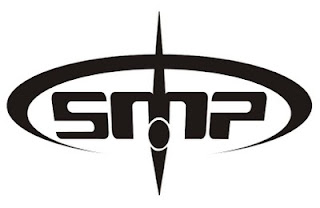 Shortly after the release of our Any Questions? - Mutation CD in 2000, we were contacted by Jason Bazinet from the Seattle, WA elektro-punk-cyber-rap band SMP. He was assembling a CD of remixes (later released as Hacked) for songs from his Terminal CD and he wanted us to contribute to it. Up until this point, we had never remixed another band's material so we thought that it would be challenging (and fun) to do.

We received a CD from Jason with all of the various parts (drum loops, bass lines, synth lines, vocals, etc) for the songs from Terminal. We checked out the CD and chose to do his song called Mutate. After all, our latest release was called Mutation so we thought that it was only fitting that we'd remix a song title that was so similar to our CD name.

We quickly got to work on it. We didn't want to take the easy way out and simply rearrange the parts that SMP had supplied to us so we started from scratch. I laid down a dance beat using our Roland MC-303 and then moved onto working on a funky synth bass line. While I was working on those parts, MC2P4 was busy transcribing the original lyrics for the song. Again, we didn't want to simply take the easy way out by using the original supplied vocal tracks from the song so I ended up singing (rapping?) the verses and only used a small detuned vocal sample for the song's chorus parts. I added other synth parts, a sampled arpeggio from the original song, and P4 recorded some Clavia Nord Lead 2 stabs and a synth solo. I mixed it and we were done.

The end result is a song unlike anything else that we have ever done. From Any Questions?, a Hypermedia Industrial Death band, you would not expect this "urban-influenced" rap-like remix. Sadly, this remix never made it onto the remix CD, Hacked. The writer of the song left SMP before the CD was released and did not allow Jason to use any of the remixes for songs that he had originally written. So, here it is... the long unreleased remix from Any Questions? for the SMP song, Mutate. 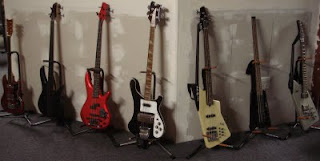 As you can see from the picture, the walls behind the instruments need to be finished. What about making them all glass? You know, go for that '70s roller disco look. Slap in a Leo Sayer 8-track and "dance the night away".
Posted by Ttam Troll at 9:43 PM No comments: