Shot during the Obomatic performance at The Batcave in New York City on 01/25/03, this video captures our cover of Animotion - Obsession.  Always a crowd favorite.  This night proved to be no different.
This was a show that almost never was.  A little over a year earlier, we had been scheduled to perform at the CMJ Music Marathon in NYC as a featured Industrial artist but the horrific events of 9/11 cancelled that show and changed the lives of a nation and a world forever.  Luckily, we later had the opportunity to go back to NYC and play at the same club which had originally booked us.
This video, shot using a handheld camcorder, is very poor quality wise but nonetheless stands as our sole document to the return of Obomatic to NYC.  I hope you enjoy it!
Posted by Ttam Troll at 11:59 PM No comments: 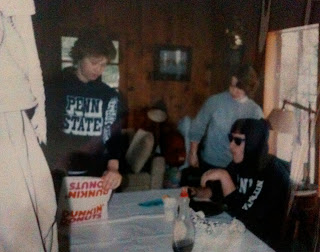 Here's another photo that I recently uncovered from my Christ United Methodist Church Youth Fellowship days in Shippensburg, PA. This photo, taken early in 1986, is from a YF retreat to the legendary A-Frame cabin in Central PA. This is the only known picture that exists of me wearing a hoodie.
Pictured from L to R: Krista Miller, Jennifer Davidson, and Matt Norcross.
Posted by Ttam Troll at 11:59 PM No comments: 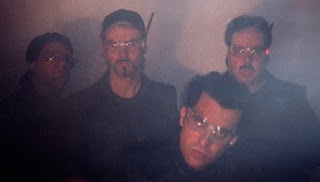 In 2000, we began recording songs for the first Obomatic CD. The first song completed was a song idea I had originally sketched together while on vacation in Myrtle Beach, SC in 1997 using only a Roland MC-303. Steve O took that rough sketch of an idea and turned it into a more complete song. Scottologic and I added some additional parts and the song, T3, was born. I mention this song creation process because it was anomalous to the rest of the CD.

The second song we recorded was a Steve O track called Antidote. As with the rest of the tracks for the CD, Holy Uncontrollio!!!, Steve O would bring in his rather complete song demos and then the rest of the band would add their parts to them. Here's a previously unreleased early mix for Antidote which is essentially the Steve O demo with a rough vocal track and some additional synth parts added.