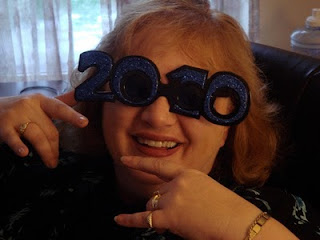 During every New Year's Eve FFS Gathering, the annual glasses come out. In this picture, Jackey McConnell becomes the latest victim.
Posted by Ttam Troll at 11:59 PM No comments:

The Chicken Strut and Wooooooo!

In early 1988, Dungeon Aire added a second guitarist, Bart "The Fart" Wilson, and we changed our name to This Mistress. Our first gig under this moniker was during Open Mic Night at The CUB on the campus of Shippensburg University.
However, this show almost didn't happen. Our lead singer, Brad Shaeffer, threatened not to perform. At the time, no one really knew why he was refusing to play but it was later revealed that he didn't want to perform because he hadn't had enough time to rehearse and develop his song and dance moves in front of his mirror.
As this video will attest, maybe we should have honored his request and not performed. You'll bear witness to his infamous "Chicken Strut" dance and bent over "Wooooooo" warblings during the choruses of the song. Remember now, he is a "Monster Man"!
This original six member line up of This Mistress included Brad Shaeffer - Vocals, Matt "Scrap Pap" Skirpan - Guitar, Kevin "Bart the Fart" Wilson - Guitar, Scott McConnell - Synthesizer, Matt Norcross - Bass, and Tim Harrell - Drums. Musically, it's a pretty good rendition of a band favorite, The Suburbs - Monster Man. As usual, "Scrap Pap" is slightly out of tune due to his penchant for tuning to the television instead of an instrument tuner but the rest of the band performs well and Scott delivers an inspired synth solo.
P.S. Thanks to Steve Olsen for, again, capturing on video another one of our performances.
Posted by Ttam Troll at 11:11 PM No comments:

Labels: 1988, Shippensburg, The Cub, This Mistress

Survival gear for the touring musician 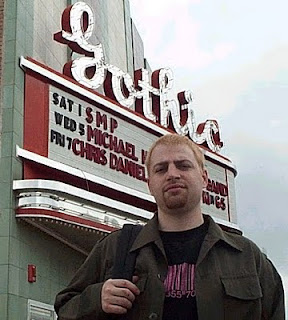 Jason Bazinet from SMP sports an Any Questions? - Mutation UPC t-shirt while out on tour.
Posted by Ttam Troll at 11:39 PM No comments:

Dirk Frey - Air Guitar and Beyond! 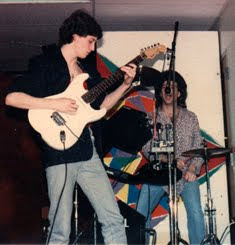 In honor of Dirk Frey's birthday yesterday, I'd like to share a song that he recorded back in 1988(?). This gem from the FFS Vaults features Dirk on guitar and playing a Roland SH-09.

Dirk and I have both come a long way since playing air guitar to our favorite Heavy Metal records (Iron Maiden, Black Sabbath, Saxon, Accept, and many others) in his parent's basement while we were in 7th Grade. It was during one of those sessions that we decided to buy real instruments and form a band.

The rest, as they say, is history!