The National Council of Astronautics have granted us permission to examine Tycho Magnetic Anomaly 0 (TMA-0).  This was recently found in Africa buried in ancient rock.  I have yet to find a power source for this monolith but here are the components that I have identified (top to bottom)...
Stageworks SPLX
Alesis ADAT XT
Alesis ADAT
Alesis ADAT
Tascam DA-30
Tascam 202MKII
Teac PB-64
Midiman Syncman Pro
MOTU 828
Alesis 3630
Korg A3
Korg A3
Korg A3
Korg A3
Korg A3
Korg A3
Korg SDD-2000
Behringer V-Amp Pro
Behringer Bass V-Amp Pro
Yamaha G50
ProCo DB-4
Steinberg Midex 8
Further analysis results to be uploaded at a later date.
Posted by Ttam Troll at 2:36 PM No comments:

Discovered on the Moon near Tycho Crater, Tycho Magnetic Anomaly 1 (TMA-1) has been excavated, returned to Earth, and is now being analyzed at the new FFS.  Though I am still searching for the power source for this structure, I have identified the following components (top to bottom)...
Stageworks SPLX
Tascam MM-1
Alesis 3630
Korg A2
Korg DVP-1
E-MU ESI-32
Novation A-Station
Novation SuperNova II
E-MU Orbit v2
E-MU Xtreme Lead-1
E-MU Turbo Phatt
E-MU Audity 2000
Korg Wavestation A/D
Roland JV-880
Roland D-550
Ensoniq ESQm
Oberheim Matrix-6R
Roland S-550
Korg DSM-1
Yamaha TG-33
Steinberg Midex 8
Steinberg Midex 8
Dr. Heywood Floyd knows that TMA-1 is at the new FFS.  His engineers were "at wits end" trying to figure it out so they called us into the project.
Posted by Ttam Troll at 11:59 PM No comments:

We came up with this song parody of Louie Louie while Scott (MC2P4) was working for Donnelley Directory Talking Yellow Pages in the Summer of 1991. Every year they would have an employee awards ceremony called the Ruby Awards. At the ceremony, they would serve breakfast and have drawings for prizes but the main purpose was to recognize outstanding work by employees during the past year. A Ruby Award was the honor that was given to each of the outstanding employees.

Scott thought that they needed a theme song for the awards ceremony so he told them that he was going to write one. They encouraged him to do so but we're sure that they never really expected him to deliver one.

Scott came back to the studio and told me what he had promised to do. He said that he'd already started to work on lyrics for it and had based them on the tune Louie Louie. He titled his song "Ruby Ruby". Though I was apprehensive about doing a parody of a popular song and, of course, thought that it was "beneath" us, we agreed that it could be fun to do if we did it in an "Any Questions?" way. So, we asked LTJTHC (Tim Harrell) to help us pull it off and away we went.

The recording session was quick and fun. For drums, LTJTHC played his Yamaha DD-5 which was MIDIed to my E-mu Pro/Cussion. I pulled out my Rickenbacker 4003 bass, which had been lying dormant since I was mainly playing synths by this point, and ran it through a nice distortion patch on my Korg A3. We recorded our tracks live to a Tascam 38 1/2" 8-track reel-to-reel machine that we had purchased from Larry Lee Fiber. I only have one version of Ruby Ruby on tape so, after rehearsing, I assume it only took us one take to record the drums and bass. I dialed in one of my signature A3 vocal effects for Scott and he sang his parody lyrics. We mixed it down and mastered it to cassette (this is before CD-R recording was common/affordable) and it was done.

Scott took the cassette in to work and, even without hearing it, his bosses said they'd use it for the awards ceremony. As the ceremony started, the Ruby Award Princess wearing her white dress, high heels, tiara, and carrying a Ruby scepter hit the catwalk. Our song, Any Questions? - Ruby Ruby, began to play and the employees erupted with applause for both the princess and our song.

Not too bad for a song parody! Check it out...

This Mistress - Music for Tents 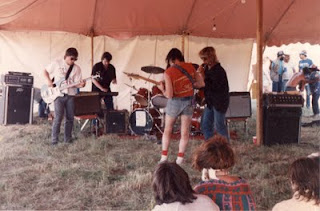 Brian Eno released Music for Airports in 1978. Not to be outdone, This Mistress performed Music for Tents 10 years later in the Summer of 1988!
Seriously, one has absolutely nothing to do with the other but This Mistress did perform under a tent during the Summer of 1988 at a birthday party for Wynn Ruffin (sp?) - a professor(?) at Shippensburg University. On the outskirts of Newburg, PA (population 361 in 2008) and in the shadows of Blue Mountain, This Mistress hit the stage (or should I say grass) for one of their final performances. This line up included (from L to R) Matt Norcross - Bass, Scott McConnell - Synthesizer, Tim Harrell - Drums (obscured by Kevin and Ken), Kevin "Bart the Fart" Wilson - Guitar, Ken Chandler - Vocals, and Matt "Scrap Pap" Skirpan - Guitar (out of frame on the far right).
This was a fun performance with a lot of people in attendance (including Jennean Hunter - foreground center fan in picture). It also had a sort of "Battle of the Bands" vibe to it since there was another band set up at the other end of the tent facing us. Another memorable thing about the day was the presence of a mobile "head" shop which was attached to the trailer hitch of a vehicle. I guess you never know when you'll need a water pipe in the middle of nowhere! A 10th grade teacher of mine, who was in the other band, was sure glad the "head" shop was there...
Posted by Ttam Troll at 11:17 PM 1 comment: