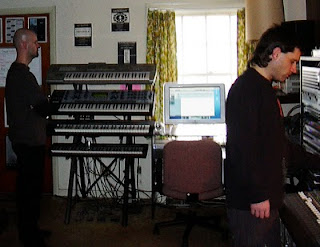 While waiting to officially release our Any Questions? - Death CD in early 1996, MC2P4 and I began working on new ideas in the studio. Our sonic arsenal had grown quite extensively leading up to this period and we were anxious to make new music with it. These ideas ranged from very structured pounding rhythm Industrial to very non-structured and improvised ambient music.

Technical falls a little bit in between both of these concepts. Recorded on 02/04/96 (the DAT says so!), this 15+ minute improvisation features a very structured/repetitive rhythm track and chord structure. On top of which we incessantly solo over intertwining synthetic tapestries and sampling overload. We had fun on this day and now you'll get to hear it too!

How Do Rocks Multiply (Solution IV) 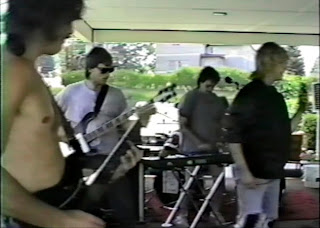 Here's another live in the studio track unearthed from the FFS Vaults. This version of How Do Rocks Multiply (Solution IV) was recorded at Horse and Buggy Highway Studios in Shippensburg, PA during the recording sessions for The Secret Society debut release in Summer 1988.

As in yesterday's post, this performance was recorded in between the "serious" recordings for the release and features the line up of M Scott McConnell (Synthesizers), Matt Norcross (Bass), Tim Harrell ("Live" Drum Machine), Ken Chandler (Vocals), and birthday boy, Kevin "Bart the Fart" Wilson (Guitar).

The occasion for this recording was Kevin "Bart the Fart" Wilson's birthday. Though none of his guitar work made it onto The Secret Society official release, we celebrated his birthday with a day (and night) music making and partying. Though by listening to this and the other recordings from this day, you may wonder which we did more of but, suffice it to say, we made sure that we did plenty of both.

Without further digression, I present to you the dueling guitar work of Kevin "Bart the Fart" Wilson.

P.S. The photo was taken at the This Mistress performance in Scotland, PA in the Summer of 1988. Pictured (L to R) are Kevin "Bart the Fart" Wilson (Guitar), Matt Norcross (Bass), M Scott McConnell (Synthesizers), and Ken Chandler (Vocals).
Posted by Ttam Troll at 12:00 AM No comments: 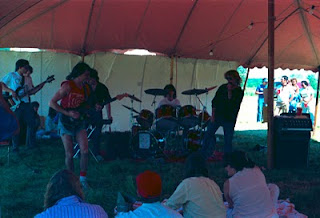 During the sweltering Summer of 1988, The Secret Society convened at Horse and Buggy Highway Studios in Shippensburg, PA to record songs for their debut release. This rev (Rev 2) of The Secret Society was comprised of members from This Mistress and concentrated on recording original songs written by M Scott McConnell and Matt Norcross.

When we weren't sweating to death (there were no air conditioners in the studio) or doing "serious" recording, we would sometimes roll tape and record some live versions of the songs with whoever happened to be visiting the studio at that time. This recording of Progressions is one such recording. It features M Scott McConnell (Synthesizers), Matt Norcross (Bass), Tim Harrell ("Live" Drum Machine), Ken Chandler (Vocals), and Kevin "Bart the Fart" Wilson (Guitar). It was recorded direct to a Fostex X-15 cassette 4-Track. It's distorted and sonically poor but still a fun listen. I hope you enjoy it.

P.S. This photo was taken at the This Mistress performance at Wynn Ruffin's Birthday Party in Summer 1988. Pictured (L to R) is the line up featured on the recording. Matt Norcross (Bass), Kevin "Bart the Fart" Wilson (Guitar), M Scott McConnell (Synthesizers), Tim Harrell (Drums), and Ken Chandler (Vocals).
Posted by Ttam Troll at 7:33 AM No comments: 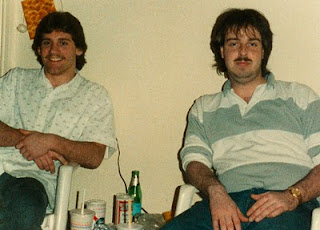 What have you boys been up to???
P.S. Pictured (L to R) are Matt Norcross and M Scott McConnell. This photo was taken in Jackey Dickey's (later McConnell) Penn St off campus (Shippensburg University) house in Spring 1988.
Posted by Ttam Troll at 12:01 AM No comments: