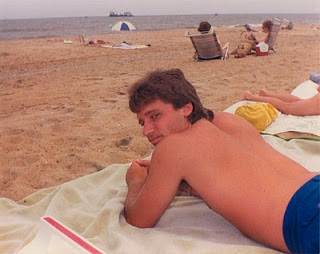 I thought that I would continue with the vacation/beach theme from yesterday's blog post. It's snowy and cold here in the Northeast so some thoughts of Summer may be just what we all need.

In early Summer 1988, I went to Ocean City, MD with the Ocker family for a fun and relaxing trip. Late at night, I took the opportunity to stroll the beaches alone. Sometimes listening to the waves and sometimes listening to my Walkman. It was during these strolls that I first had the idea for writing a song that would sonically capture the sound of a listless ocean along with the power and elegance of the waves as they crashed upon the shore. This was not a novel idea but for an 18yr kid (excuse me, man) it provided enough stimulus for a creative spark to be ignited.

It took about a year before I fully realized this idea but here I present to you the live version of Floundering In A Sea of Digital Waves as performed by Vizator at the PPG Plaza in Pittsburgh, PA (Summer of 1989). While listening, please try to ignore the incessant guitar synth flute soloing which is going on. It is NOT part of the song I wrote.

P.S. Thank you to Tonya Ocker for capturing this picture of me with "Bedhead".
Posted by Ttam Troll at 10:09 PM No comments: 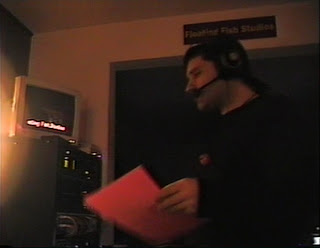 Reaching #32 on the CMJ RPM charts in 2000, our Any Questions? - Mutation CD release was a resounding success. Much of that success was built upon the title track, Mutation, which led off the CD and was featured on radio stations, CD compilations, and dance floors worldwide.

The genesis of this song began in 1997 while I (Ttam Troll) was on vacation in Myrtle Beach, SC. I had recently purchased a Roland MC-303 groovebox but hadn't had the chance to learn how to use it. I figured that there would be no better time to learn it than when I was on vacation. So, I took the opportunity to challenge myself to do two things. First, learn how to program the MC-303 and second, to see how many song sequences I could write in 5 days.

The first challenge proved to be the most difficult. I had been using computer sequencing (Steinberg Cubase) since the early '90s and trying to come to grips with a very archaic hardware-based sequencer was mind-numbing. The six digit display was no substitute for the GUI of the software-based sequencers that I had become accustomed to. However, I persevered and, by the end of day two, I was fully up and running and was able to make it do my evil bidding.

At this point, since I could actually operate the MC-303, I was ready to begin the 2nd part of my challenge. The ideas flowed freely and, by the end of the week, I had amassed 20 song sequences. To this day, I'm still not sure how it happened. I'm usually not that prolific. Was it the 105+ degree temperatures, the subarctic condo, the warm ocean and pool waters, my self-imposed isolation, or the bevy of bikini clad women that seemed to always parade by? Who knows?

Anyway, it was about a year later that MC2P4 and I revisited the song sequences that I wrote on that vacation and one idea immediately stood out as being a keeper. We wasted no time and began adding additional synth and drum parts to it. We later added a round of samples (all from the 1996 movie, 12 Monkeys) and recorded my vocals. I mixed the song a few days later and it was complete. This song also has the distinction of being the first song that we completed for our Mutation CD release.

Here it is for your listening pleasure...

P.S. The picture of a portly Ttam Troll was taken in 1998 at Floating Fish Studios during the actual vocal recording session for this song. Also note the pumpkin necklace, a standard fashion accessory for Ttam Troll during this time period.
Posted by Ttam Troll at 11:59 PM No comments: 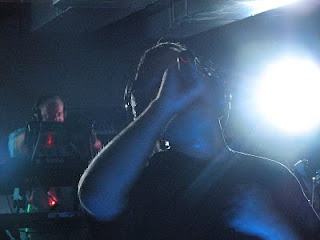 Labels: Alive I Am Tour, Any Questions?, MC2P4, Ttam Troll 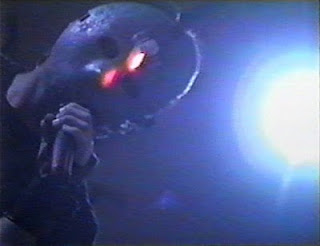 Recent events reminded me of this murderous song about euthanasia and the icy thoughts which spawned it. During a depraved and grueling overnight recording session in 1991 at FFS II, MC2P4 and I (Ttam Troll) began a sonic experiment which quickly spiraled into this brutal track.

I offer this previously unreleased demo of Minds Curl as a stark reminder to the fragility of life under a merciful or merciless hand.

Posted by Ttam Troll at 3:06 AM No comments: