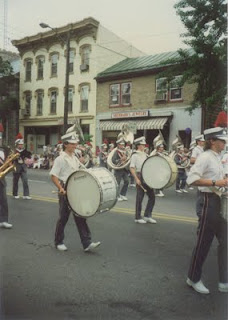 So, if you happen to play electric bass (Matt Norcross) and electric guitar (Dirk Frey) in high school band, what are you supposed to do when it comes time to fulfilling your marching band duties?  Well, this picture holds the answer...  Play bass drum (and imagine it sounds like a LinnDrum).
P.S. This picture is of the Shippensburg Area Senior High School Marching Band and it looks like it is from the 1987 Memorial Day Parade.  I believe that Dave Chandler is also in this picture playing Tuba.
P.S.S.  For more band geek fun, click here.
Posted by Ttam Troll at 4:49 PM No comments:

This video is from an Any Questions? in studio rehearsal on 10/20/09 for the Alive I Am Tour. There are no 9' x 12' video screen visuals, no props, and minimal lighting (all of which will be part of the "real" show on 10/31/09) but it does give you a behind the scenes glimpse into what goes on in preparation for our live shows.
Posted by Ttam Troll at 11:59 PM No comments:

Labels: Alive I Am Tour, Any Questions?, Live, Presto 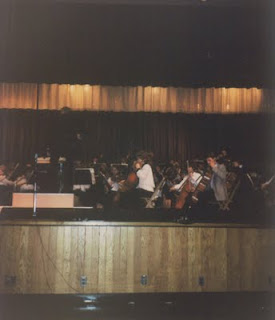 I had been playing double bass for less than a year at the time of this performance. Though I had played electric bass since I was 13 (circa 1983), it wasn't until Mr (Kurt) Hargleroad heard/saw my performance with the rock band Fantasia (Ken Chandler - Vocals, Dirk Frey - Guitar, Matt Norcross - Bass, and Lonny Fiber - Electronic Drums) in the Fall of 1985 at a SASHS talent show that he approached me and asked if I wanted to continue my bass studies with him.

I jumped at the chance to work with him since he had the reputation of being a very accomplished musician and an excellent educator. I discovered first hand that was all true! He pushed me to become a much better electric bass player and, luckily for me, he encouraged me to broaden my musical horizons which eventually led to my study of double bass technique and music theory. Along the way, he helped me land my first professional music gig playing electric bass for the Sounds of the Decades, paved the way for my entrance to college as a music education major at IUP, and even managed to get me into a marching band uniform (but let's try to forget that).

But I digress, let's get back to this performance. Under the direction of Guest Conductor - Blaine Shover, here is Mozart's Eine Kleine Nachtmusik (Movement I). Enjoy...

What would you do with a camcorder, some Alka-Seltzer, and a bucket of dead fish? Well, back in 1993, we at FFS decided to film our first logo video title. We descended upon Tiny Park (a friend's farmhouse estate) with our smelly catch of the day and set up our equipment to stage the shoot. In the small stream that ran through the property, we carefully placed our mutilated fish parts and dropped in Alka-Seltzer tablets to simulate a frothy, toxic environment.
After filming the raw footage of our toxic fish stew, we headed back to the studio to finish the title. Our obstacle, at this point, was to figure out a way to add the FFS text over top of the picture. We didn't have a character generator or a non-linear editing system, which would have made adding the text very easy, so we had to be creative. Our FX generator (Panasonic WJ-AVE3) had a superimpose video input and my solution was to print the Floating Fish Studios name on the top and bottom of a 8 1/2" x 11" piece of paper, tape it onto the wall, point our camcorder at it, and feed the output of the camcorder into the superimpose input of our FX generator. I centered the text over the fish footage, colorized (green) the picture, and "voila"! We had our first FFS logo video title.
It's basic and does not have any sound but it's imagery literally communicates what we meant by the name Floating Fish Studios.
Any Questions?
Posted by Ttam Troll at 11:59 PM No comments: