As we were beginning recording sessions at Floating Fish Studios on the Obomatic - Holy Uncontrollio!!! CD, we took time out to headline a show at The Trocadero on 07/15/00 in Philadelphia, PA. Being Philly's premier live concert theatre venue, it was a show that we couldn't pass up. We had only been performing live for a few months but had already established a loyal fan base. This was due in part to our reputation as an electronic supergroup comprised of members from Punch Drunk and Any Questions? as well as the staunch support we received from a local promoter, DJ Octopussy.
This show features the original live infiltration Obomatic unit which consisted of Steve O - Vocals, Troll IO - Synthesizers, Scottologic - Synthesizers, and Timmotronic - Electronic Percussion. It was also our most elaborate stage show to date. The high intensity RoboScan light show helped to mesmerize the audience as we pummeled them with a set of dope-adelic hiptronica and jacked up rap-alistic techno-disturbia.
Special thanks to Steve "Awesome" Olsen for videotaping this performance for us. Unfortunately, the excessive volume from the PA system was too much for his set up to capture so the audio is distorted.
Posted by Ttam Troll at 11:59 PM No comments:

This raw unedited video footage is taken from FFS II Synth Jam 2010 which was held on 02/20/10. The ensemble gathered included Tim Harrell (aka LTJTHC), Dave Chandler (aka Thee Sub One Genius), M Scott McConnell (aka MC2P4), Stephen Saputelli (aka Steve O), and Matt Norcross (aka Ttam Troll).
As you'll see in the video, though the music may sound "serious", we certainly were not. This improv is titled TR-6.
Posted by Ttam Troll at 9:00 PM 2 comments:

Gil James and his Sounds of the Decades Part 4 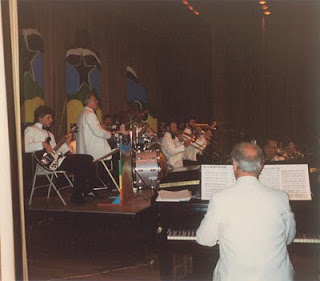 Wow, I'm looking pretty excited to be doing this gig with Gil James and his Sounds of the Decades in April 1988.  Maybe I'm just trying to hide behind my music stand.
Posted by Ttam Troll at 11:59 PM No comments: 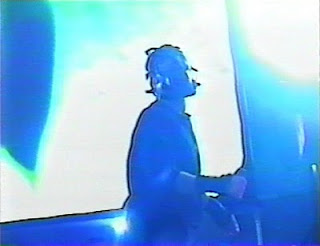 Extinction was one of the final songs composed for Any Questions? - Mutation release in 2000. After completing several harsh and aggressive Industrial tracks, I felt the need to slow things down, retreat inwards, and create a dark, sinister electronic soundscape to compliment the other songs on the release.

The result was an ominously bleak sounding instrumental. Birthed during one late night recording session as I watched John Carpenter's 1994 film, In The Mouth Of Madness, I truly felt as if I was spiraling deeper and deeper into an abyss of Lovecraftian despair. A sample from the film, "Every species can smell its own extinction", exemplifies this mood and provided the impetus for the song.

MC2P4 and LTJTHC came in during a later recording session and added to the horror I created. LTJTHC's tribal-like electronic percussion urges the song forward while MC2P4's eerie synthetic leads fill the listener with a sense of total futility.

Come join us on this descent downward...