Floundering In A Sea Of Digital Waves 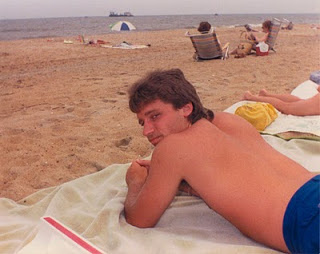 In early Summer 1988, I went to Ocean City, MD with the Ocker family for a fun and relaxing trip. Late at night, I took the opportunity to stroll along the beach alone. Sometimes listening to the waves and sometimes listening to my Walkman, it was during these strolls that I first had the idea for writing a song that would sonically capture the sound of a listless ocean along with the power and elegance of the waves as they crashed upon the shore. This was not a novel idea but for an 18yr kid (excuse me, man) it provided enough stimulus for a creative spark to be ignited.

It took about a year before I fully realized this idea but here I present to you the initial demo version of Floundering In A Sea of Digital Waves as I recorded it in the Summer of 1989.

P.S. Thank you to Tonya Ocker for capturing this picture of me with "Bedhead".
Posted by Ttam Troll at 11:33 PM No comments: