Rumors are abounding that Imbued Vagary may be performing a live electronic experiment this Halloween (10/31/09).  Details to follow...
Posted by Ttam Troll at 3:44 PM No comments:

Body Bags was the first video off our Any Questions? 2000 release, Mutation. We took the song's title literally and slid ourselves into large garbage bags on a very hot summer day to shoot part of this video. The video also has all of the other "classic" Any Questions? elements - gas masks, blood, violence, fog, toxic liquids, strobe lights, dismembered baby dolls (taken from my sister years ago) and, of course, severed heads!
This was shot in The Griffith Compound at The Farmhouse in 1999. Steve Olsen manned the video camera while Kelly Hoffman and Beth Ballein were running lights and shooting off fog when they weren't assisting with video or suffocating in body bags.
It was a long but very fun day!
Posted by Ttam Troll at 11:28 PM 1 comment: 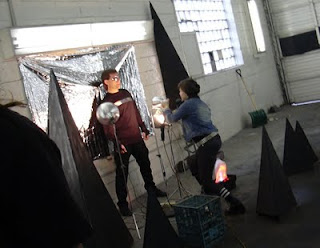 Here's a behind the scenes picture from an Obomatic photoshoot in 2003. Very fashionable...
Posted by Ttam Troll at 11:26 PM No comments: 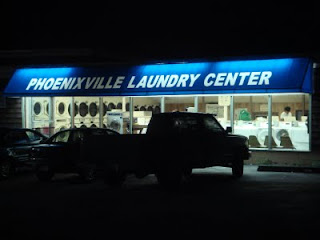 In a post last week, I was talking about the "comedic" lyric versions for some of our songs. I'd like to share another example of this. It's a song idea (well, really only a verse that's repeated) called Solar Wash.

Back in 1989, when I first moved to the Philadelphia area (Phoenixville, PA to be exact), I was taking a break from working in the studio to go and do some long overdue laundry. Why would I feel the need to tell anyone about this? Well, because it was the inspiration for the first Any Questions? song that I would ever sing. To some, I may be stretching it a bit to say that I'm "singing" but that's a debate for the comment log.

Up until this time, MC2P4 and I had been writing a lot of songs and he had handled most of the vocals duties for those early songs. We also had a few guest vocalists - Ken Chandler and Brian Black. However, my visit to the Solar Wash (now called the Phoenixville Laundry Center - pictured above) and the experience I had one day in the Fall of 1989 was to change all this.

On that fateful day, I trudged into the laundromat and looked for a washer to put my clothes in. As I walked down the first line of washers, I realized that they were all in use. This struck me as odd since I hadn't noticed anyone as I entered the laundromat. It was at this time, as I rounded the turn to check out the next row of washers, that I saw a couple who were sitting side by side at the end of the row of formed, plastic seating by the window. As I made eye contact with the "male", the "female" stood up and dropped the paper bag wrapped "40" that was in her hand. It shattered and spilled beer all over the floor. Unphased, she began muttering to herself and started to walk towards me. By this time, I had found an empty washer and started to load my clothes. As she staggered closer and closer, she began to gesture to me to move to another washer. I then looked over at the "male" who, before my eyes, fell off his seat and onto the floor.

As luck would have it, at that moment, another couple entered the laundromat and began laughing hysterically at the "male" who had fallen to the floor.  This laughter distracted the "female" from her zombie-like advance on me and she turned to go and aid her "male" companion.  She gathered him from the floor and they shambled outside into the night.

That would be the last I saw of them.  The whole first row of washers eventually finished running but no one ever came to claim their contents.  I endeavored to wash and then dry my clothes and then left the Solar Wash with the inspiration for this little idea (complete with laundry word play)...