This photo was taken at the Shippensburg Area Senior High School (SASHS) Mid Winter Concert on 02/02/87. However, the Christmas decorations that still adorn the auditorium would suggest that this picture could be from The Christmas Program which took place on 12/14/86.
Featured in this photo are (L-R) Donny Ernakovich - Percussion, Matt Norcross - Electric Bass, and Jason Wert - Drums.
P.S. Note to self - Stop trying to look like Geddy Lee (Rush)!
Posted by Ttam Troll at 11:59 PM No comments: 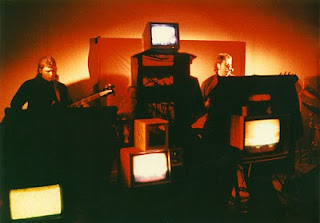 This photo is taken from the first Any Questions? live performance in 1990.
Posted by Ttam Troll at 11:59 PM No comments: 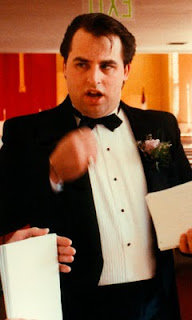 One of these singers was our friend, Brian "Who" Black. He had sung with some other bands so we decided that it was worth giving him a chance and see how well he could do with the material we were writing.

The first song that we worked with him on was a track called Slam. I had spent several days sequencing this song and working out the live keyboard parts and bass solo. During this period of production, I recorded numerous versions of it. In fact, this is probably the most recorded song in the history of the band. There are well over 20 versions of this song on 4-track tape.

I had originally intended for it to be an instrumental but, after realizing that is was "lacking something", we brought in Brian to see what he could add to it. His sharp, biting vocal performance fit the musical style of the song well and we were somewhat pleased.

MC2P4 continued to work with Brian on a few more songs but, eventually, we decided that Slam and the other songs that Brian contributed to didn't fit in with our other compositions. By this time, our music was becoming much more industrial and aggressive and I had begun to be the voice of the band. Because of this, all versions of this song have sat unreleased in the FFS Vaults for over 20 years.

So, after 20+ years in the FFS Vaults, here is Any Questions? - Slam featuring Brian "Who" Black on vocals. This recording is rather "noisy" but I have chosen it because it also includes one of my favorite electric bass solo performances. As you'll hear, I obviously have a "little" Peter Hook (New Order/Joy Division) influence in my playing.

This Mistress - Live at SASHS 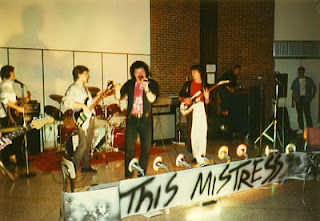 Being a member of Student Council had its advantages during my senior year at Shippensburg Area Senior High School (SASHS) in 1988. One of the perks was when it came time to offer suggestions for entertainment at Winter Carnival (a school event/dance), I was able to recommend the band I was in, This Mistress.
In the end, it came down to a Student Council vote between This Mistress and a DJ. After the ballots were cast and counted, This Mistress was chosen to perform at Winter Carnival on 03/12/88.
In retrospect, the $120 budget that Student Council had for entertainment would have better served the student body if they had chosen the DJ. Though we performed a good set of modern and classic rock songs, most of the student body would have probably preferred the DJ. So, to the students of SASHS in 1988, please accept my apology for suggesting that This Mistress play at Winter Carnival.
The original six member line up of This Mistress which played this show included Brad Shaeffer - Vocals, Matt "Scrap Pap" Skirpan - Guitar, Kevin "Bart the Fart" Wilson - Guitar, Scott McConnell - Synthesizer, Matt Norcross - Bass, and Tim Harrell - Drums. We also had extra tech support which included Ken Chandler - Main House Mix, Chris Terry - Lights, Kurt Smith - Videography, and Tony Townsend - Guitar Tech.
Some of the songs from our set included Guns 'n' Roses - Welcome to the Jungle, The Cult - Wildflower, INXS - Need You Tonight, Led Zeppelin - Misty Mountain Hop, Ozzy Osbourne - Crazy Train, and Red Rider - Lunatic Fringe. As you can see, our set was musically all over the place.
Though video of this performance does exist. The quality of the tape is very poor so I'm not going to share it at this time. Unfortunately, at the end of filming this performance, Kurt Smith dropped and broke his VTR machine (Sorry Kurt!) that he was carrying in his back pack to record the show. Maybe I'll be able to resurrect some of the footage for a future post but, for now, you only get to enjoy a picture from the show.
Posted by Ttam Troll at 11:59 PM No comments: