This photo was one of several unearthed recently in the FFS Vaults. It depicts Ttam Troll working on his trusty Atari 1040STe at Floating Fish Studios. This was shot in March, 1992 during sessions for Any Questions? - Prey For Death release.
P.S. Notice the lovely wood paneling and flowery curtains. A nice touch for any professional studio.
Posted by Ttam Troll at 11:59 PM 2 comments: 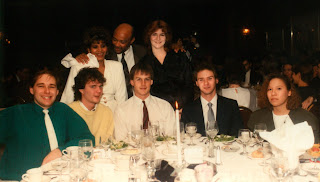 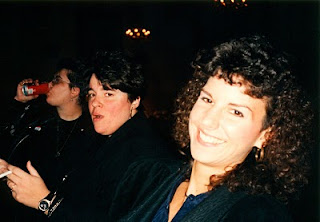 This is one of my favorite photos.  Pictured (L-R) are our friends and co-conspirators Kelly Hoffman, Beth Ballein, and Amy Griffiths.  This was taken at the Any Questions? Halloween Sacrifice show on 10/15/94.
Posted by Ttam Troll at 11:37 PM No comments:

Stink On My Hang Low 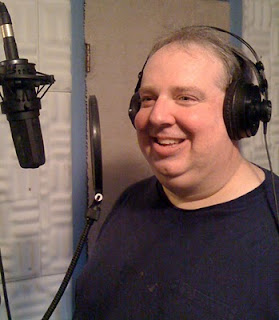 For over 15 years, we have done studio consulting work for clients and friends. This work consists of anything from making equipment recommendations, installing computer and musical hardware and software, equipment and software training, wire installation, calibrations, and everything in between.

A long time client and friend of ours, Kevin "Curve" Young of Platinum Recording Studios, has us in quite frequently to help him. Curve is a well known R&B, Rap, and Gospel producer and artist and always has a fresh batch of songs to play for us every time that we visit.

At our last visit (on 02/28/10), he contracted us to test and optimize his Focusrite Saffire Pro 24 audio interface for use with his Apple Logic Pro Studio music software. To do this, I loaded a new R&B flavored song that Curve had been working on into his Logic Pro 9 sequencer software and began testing.  After configuring his interface software settings, I asked Scott to go into the live room and improvise some lyrics over the music track that I had loaded so I could test the inputs of the audio interface.

Here's where things get interesting... As most of our friends know, we have the habit of replacing serious songs lyrics with "comedic" and sometimes vulgar ones.  On this occasion, there were no lyrics to replace but Scott chose to improvise some lewd ones anyway.  No one in the studio could believe or contain their laughter at what Scott was singing/rappin'.  Afterwards, I just had to edit and mix the track so we could "share" it.  After all, some of our early hits like Baby, Please Suck Me and the infamous Come Fudge My Brown were never recorded.  I was determined not to let this one slip away.

So, here it is...  Scott singing and rappin' to a R&B groove that we've titled Stink On My Hang Low.