Secret (aka Pocket of Sucrets) 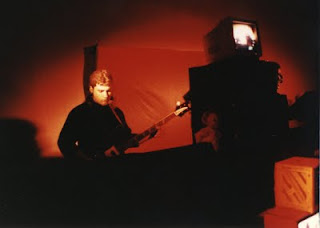 This photo is taken from our first live performance in 1990.  It captures a rare event for Any Questions? - MC2P4 singing and Ttam Troll playing bass.  This would end up being the last time that electric bass was used in an AQ? song and this is one of the last songs that MC2P4 would sing for the band.  The only officially released song after this performance with MC2P4 singing would be Hardware from our 1991 Don't Ask release.  I ended up taking on all vocal duties after this.
However, don't fret, there are plenty of early AQ? tracks in the vault that feature MC2P4 on vocals.  Many of which are classics and have long been requested by our fans.  Most of these songs have 2 sets of lyrics.  One version contains the "serious" lyrics and the other a more "comedic" take full of in-jokes and other P4 fun.  I'll post some of them here in the months to come but, for now, I'll leave you with a verse from the "comedic" version of lyrics for our song Secret.  This version is entitled Pocket of Sucrets and Ken Chandler and I wrote these...
I've got a pocket of Sucrets
Leaking out one by one
I'm got cherry and menthol
A sore throat is very unfun
Posted by Ttam Troll at 11:19 AM No comments:

On November 24, 1990, we (Any Questions?) burst onto the Industrial Music scene with our first live performance. We had formed in the Fall of 1989 and had written and recorded several songs in the time preceding this performance but this show gave us our first chance to showcase the new and innovative "Hypermedia Industrial Death" stage show that we had created.
Our stage show drew heavily from the same Horror, Sci-Fi, and Cold War propaganda movies that inspired our music. We were excited to finally add this visual element to our music and this synergy of audio and video would later help shape the music videos that we would produce.
Helping us to pull off this first live performance were Michael E Lightkep - House Mix, Kurt Smith - Light Operator, Steve Olsen - Follow Camera and Post Edit, and Matt Skirpan - Neo Nazi Cam.
Our 8 song Electronic set ran long on time so we never had a chance to perform the 3 song encore set that we had prepared with Tim Harrell - Drums. Luckily, we have some audio-only recordings of rehearsals for this 3 song set and I'll share those in later posts.
P.S. Oh, by the way, this performance took place in Valley Forge, PA at the Park Ridge Hotel at the wedding reception to celebrate the marriage of Scott and Jackey McConnell. I bet you never thought that Any Questions? would/could be a "wedding band". You wouldn't be alone with those thoughts. The wedding guests were unaware and unprepared for what we had in store for them that night!
Posted by Ttam Troll at 11:19 PM No comments: 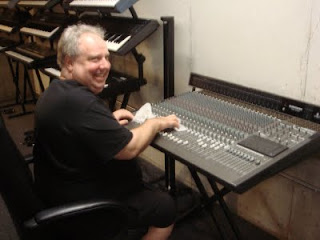 Here's a shot of MC2P4 hard at work on cleaning up one of our Behringer MX8000s.  The new FFS is getting ever closer to completion.
Posted by Ttam Troll at 11:59 PM 1 comment: 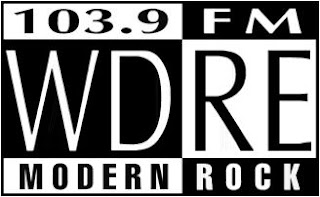 Back in the early '90s, the internet wasn't used as a medium to promote music. There were no MP3s, no music sharing sites, and no iTunes. There wasn't even a good GUI web browser (Netscape Navigator) until the end of 1994. If you were in an "unsigned" band and wanted your music to be heard, you needed to go out and play live shows and/or try to get your music played on the radio. College radio was usually receptive to new music and would take chances on local or "unsigned" bands but getting any airplay on a commercial station was near impossible.

As luck would have it in August of 1993, a past co-worker of Scott's from Donnelley Directory was working at B-101 - a soft rock/adult contemporary radio station. He had a cassette of our latest release, Any Questions? - Prey For Death, and, knowing that our Industrial style music would never fit into the program format at B-101, he forwarded our cassette to his friends at 103.9 WDRE - Philadelphia's modern rock radio station.

They must have liked what they heard because I received a call from the station and they said that they planned to feature one of our songs during an upcoming Local Edge radio show - their weekly local music spotlight segment. I gave them some background info on the band and suggested that Limerick Lights (Radiation Mix) would be a good song to play.

I got a courtesy call about a week later from the station informing me that our song was scheduled to be played during the 08/15/93 Local Edge show. This would be our first mass exposure on the Philadelphia music scene and we were excited. We told everyone that we knew that we were going to be on the radio and that they should tune in. Not many people had e-mail at this point so we had to contact everyone by phone or word-of-mouth.

When the day of the broadcast arrived, we tried tuning in the radio station so we could listen to the show and record it. Normally, we never had a problem tuning in the station at either FFS I or FFS II but, on this day, the reception was full of static. We tried everything... We placed the antennas in every possible position, moved the radios all around the studios, etc. No matter what we tried, we couldn't get good reception.

Not to be deterred, we called our friend at Club Wojo and asked what his reception was like. He said that his reception was good and he invited us down. With time quickly running out, we jumped in the car and sped down to Club Wojo. With seconds to spare, we made it there and set up our recorder. This is what we heard...

P.S. I told them that Any Questions? were from Pottstown, not Doylestown as Mel Toxic says during the broadcast. "Not that there's anything wrong with Doylestown..."
Posted by Ttam Troll at 11:18 PM 1 comment: