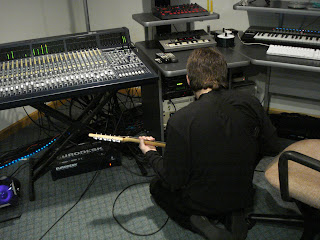 Backstage at the 1988 Mr IUP Pageant 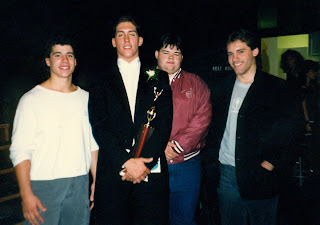 Here I am (far right) backstage at the 1988 Mr IUP Pageant with the sleepy looking Talent Winner Greg Wood (the guy in tux with trophy) - Vocals & Keyboards and my friend Sam Gabud - Drums (2nd from right).  I don't remember the guitarist's name (far left).
You can click here to see a video of this line up performing Elton John's Crocodile Rock on a TV broadcast for Operation Bundle Up (charity drive).
Posted by Ttam Troll at 11:59 PM No comments:

This Mistress - Music For Tents Part 2 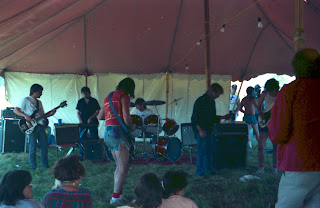 Larry Lee (founder of Los Angeles club scene band Fashion Risk) was back from LA to visit his family in New York when he decided to make a little detour South to visit Scott and I at Der Palast des Goldes for a weekend session of improvisational recordings. These recordings have since become known as the We Are Glass Sessions (for obvious reasons to those involved).

Larry Lee arrived early Saturday morning but we were unable to begin recording right away. Our equipment was installed at P&G Studios where Scott and I had been demoing our (Any Questions?) latest ideas. P&G Studios was inadequate for our session so we tore down that set up and rebuilt it, in record time, back at Der Palast des Goldes. We were up and running by noon.

The sessions spawned several classic improvisational recordings including this ultra rare track called We Are Glass. This is the only recording of this line up to feature Larry Lee singing and, even though the lyrics and melody are completely improvised, they help to showcase a "what could have been" moment for the band. In addition to Larry Lee singing and playing synths, Scott is laying down the foundation for the song with his synth playing while I contribute lead electric bass (and constant soloing) for the whole 5:35 of the song.

I hope you enjoy this ultra rare classic track from the FFS Vaults. Here is FiConnellNorc - We Are Glass...