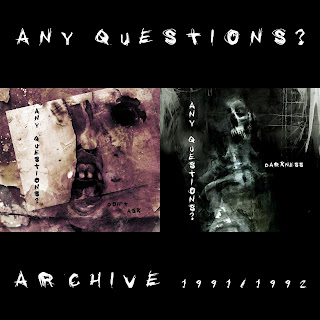 Scheduled for release on 05/07/21 is a 2 CD collection of music from Any Questions? titled Archive 1991/1992.  These Special Edition CD releases of their 1991 Industrial classic, Don't Ask, and their 1992 Soundscape masterpiece, Darkness, have been remastered by Tommy T Rapisardi at DSBP Records and features bonus tracks, limited edition DigiPak packaging, and illustrations by Eyes of Chaos creator, Mike Bohatch.  Archive 1991/1992 contains...

This special edition of Any Questions? - Don't Ask celebrates the 30th anniversary of the electro-terrorist unit’s second audio assault. The band's harsh Industrial sound emerges on this release and forms the foundation for their later sonic experiments.

This special edition of Any Questions? - Darkness celebrates the 29th anniversary of the electro-terrorist unit’s release of pure audio sculpture.  The electronic experiments and sonic soundscapes contained within herald the beginnings of the Imbued Vagary project.

Posted by Ttam Troll at 9:13 AM No comments: