Ken Chandler sings with Any Questions? 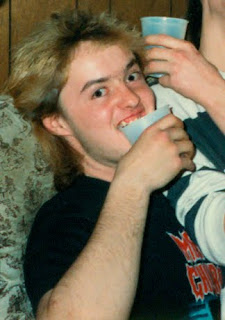 One of these singers, whom I wrote about in an earlier post, was Brian "Who" Black but the first singer we worked with was our friend, Ken Chandler. MC2P4 and I had both known Ken for many years and had played in several bands with him. Some of these bands included Fantasia, This Mistress, and The Secret Society (rev 2).

One weekend in Fall 1989, we invited Ken to visit and record with us at Der Palast des Goldes. We (Any Questions?) had been working on several songs and, by this time, had three (Nightfall, Numan (Madonna's Puss), and Vagary) that we felt were ready for vocals. We played these songs for Ken and then turned over our Fostex X-15 Multitracker 4-Track Cassette Recorder and pair of headphones to him so he could listen to them and compose lyrics.

After a day of sporadic work and excessive partying, which frequently happened at Der Palast des Goldes, Ken had finished lyrics for these songs and we endeavored to record them. The second song that we recorded is one entitled Vagary. It's quite different than a "typical" Any Questions? song. This pensive synth rock experiment showcases the more varied experimental sound of early Any Questions?. I hope you enjoy it.